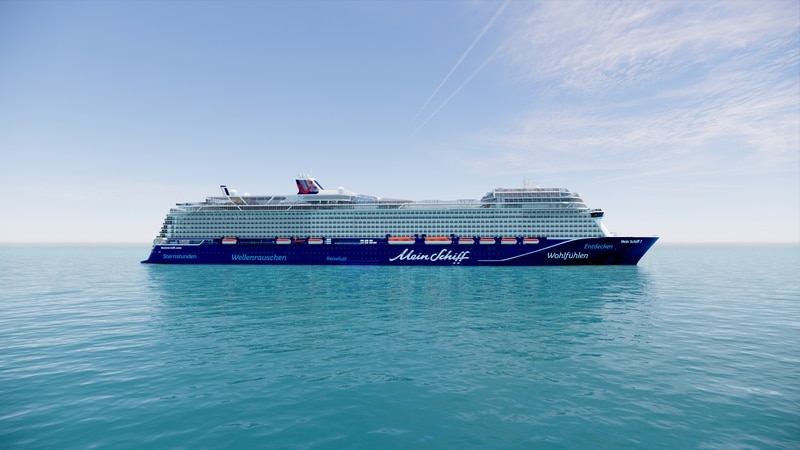 TUI Cruises recently revealed the first details of its next new version, the Mein Schiff 7.

Scheduled to enter service in 2024, the 2,900-passenger vessel is the seventh in a series built for the company at the Meyer Turku shipyard in Finland. After Mein Schiff 2 is built in 2019, the new ship will introduce new features while bringing back concepts from existing ships in the fleet.

According to TUI, return favorites include a variety of food venues, a 25-meter swimming pool and generous proportions of space per passenger. The Mein Schiff 7 also has a new single-cabin set. With “attractive design”, the rooms will be available for a small fee, said the Germany-based company.

Another novelty is Asia & Sushi restaurant. Connected to the ship’s signature Diamant Bar, the specialty restaurant will serve both hot Japanese dishes and sushi dishes.

The 110,000 ton ship also debuted with a new casino. Located above the Abtanz Bar, this smoke-free venue serves as a gaming venue and dance club, featuring slots and table games, as well as a dance floor and bar. Other features announced include the Bella Italia restaurant, the Kaffeehauskultur cafe and the Champagner Treff bistro.

Returning to the ship, it will be located on the outdoor area of ​​Deck 6 and will have a new design. According to TUI, the bar is designed to be the perfect place to gaze at the skyline, with a patio for protection from the weather.

The Mein Schiff 7 will also feature green technology, including a shoreline power connection system and a highly efficient catalytic converter. The vessel will also run entirely on low-emissions marine diesel and be ready to run on green methanol in the future. According to TUI, marine fuel will help the ship’s propulsion system to be almost CO2 neutral.